Have you ever dreamed of flying through the water like a dolphin on steroids?

(Advisory: Although this tour is willing to work with people of all abilities, it is still necessary for safety reasons that participants have strong grip capabilities with hands and arms, no neck issues, and strong swimming skills.) 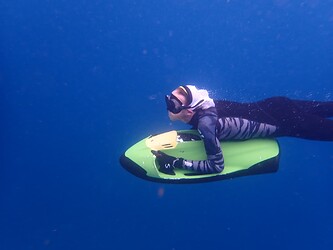 A few years ago when Covid restrictions first started to lift, I grabbed my husband and caught the first flight to Sint Maarten Island that we could get on. When we arrived, we practically had the island to ourselves when it came to tourists and found that tour guides were more than willing to work with me and my physical disabilities since they didn’t have to focus on large tour groups.

However the one tour I wasn’t able to convince to work with me, was the new tours being offered using Sea Bob’s. (For people who are unfamiliar with what Sea Bob’s are, imagine a hand held jet ski engine that allows divers and snorkelers to fly over or under the water’s surface at speeds that match. Here is a link with more information.) You can’t imagine how angry that made me. My biggest pet peeve is when people make assumptions about what we are capable of. That is something we like to determine for ourselves.

So when we got home, I started working on planning our next set of excursions for an upcoming cruise we had booked that was going to be stopping in Aruba. Usually when we visit Aruba just for a day, I always book us on a Motorcycle-Trike* tour that also loves to work with people of all abilities (that is another review I am working on); but I noticed a company, SeaBob Aruba, also offering SeaBob tours and I thought I would make my pitch to them to see about including me in the tour. Not only were they willing to work with me, they started explaining to me how they are very used to working with people of all abilities and would love to have us on the tour. I was so excited, even though the tour was still 7 months away.

The day finally arrived when we docked in Aruba and I had my dream day ahead of me; a motorcycle tour all morning and Sea Bob’s all afternoon. The tour company met us right outside the dock and arranged a safe spot for me to load into the car and they were able to fit my entire wheelchair in the back of the van. Lucky for us that we were the only two people booked for the afternoon and ended up with a private tour. After a fast stop to pick up the trailer with the gear, we headed to the beach spot and our tour guides did a tutorial for us about how the equipment worked and how to use it safely in the water; while I worked to get my wetsuit gear on. Once I was ready, the incredibly strong tour guides lifted me up in their arms and carried me safely all the way to the water and carefully set me down and my husband joined us in the water. 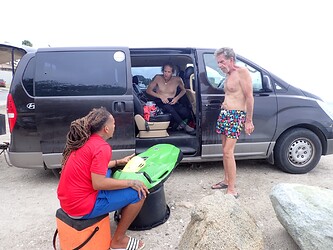 Once I am in the water I am a strong enough swimmer that I am ok without an aide; but my wetsuit does keep me floating at the surface. We were given our Sea-Bob’s and offered some time to familiarize ourselves with using the devices in the shallower water. As soon as we gave the cue we were feeling good with it, we headed out towards the sunken ship off-shore. On the way out, I took the chance to use the device under the water at top speeds and felt like Aquaman soaring under the water. The only downside was you can only stay under the water for as long as your breath lasts because we weren’t using any breathing apparatus. However this device is also used by scuba divers, so they can be used underwater for extended times if you had the correct equipment. On the way out, the guides pointed out some large turtles under us and I was able to swim right over them.

After a few minutes of soaring through the water, our tour guides informed us we had reached the ship. They did forget to mention what type of ship, so I was a little overwhelmed when you look down and see a sunken WWII German warship that was HUGE and cracked in half. Plus everything always looks bigger under the water with your mask on. Once I finally got used to looking down at it, we took turns trying to fly down near it, but it was too deep for my husband and I to get too. Instead though, we were entertained by our tour guides who showed off their underwater superpowers and performed magic flying in and around the ship for the longest time. Was so cool watch and gave me fantasies of someday having that kind of breath control. 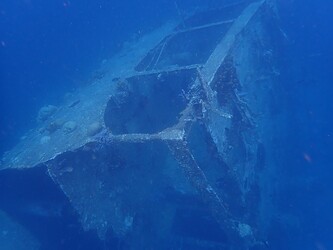 When we were done exploring the ship, we headed back to an area more known for more large turtles and underwater sea life. This time when we spotted another giant turtle, I managed to swim right next to them for quite awhile. When I started to realize they were not comfortable with the Sea Bobs, I backed off and gave it more space. As we got closer to the reefs, so many fish started showing up that I thought I was in a musical number from the Little Mermaid. I only wish I knew the names of what I was seeing to tell you what was down there, but it was AMAZING! 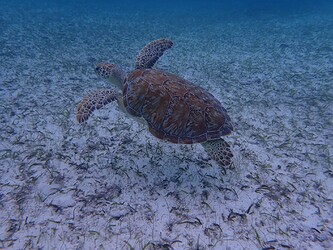 Before I knew it, the time had expired and it was time to head back to the beach. It was so sad having to head back, because my adrenaline was pumping so high from getting to experience all of that. Beyond how cool the Sea Bob experience was, there is something about accomplishing a task that someone else said you were incapable of that gives you this high about being alive and for just that brief moment in time, I have a feeling like I am capable of anything.

These magical Seabob devices gave me the ability to reach areas above and under the water that I would have never been able to reach on my own due to my legs not kicking anymore… so I was in love. Plus these tour guides never doubted me and let me try everything without any hesitations, giving me that brief moment where I didn’t have to feel like I stood out with my disabilities. I wish I could explain how good of a feeling that is (to me at least), but as the guides carried me out of the water and back to the van to de-wetsuit; I was overwhelmed and didn’t know if I wanted to cry or just grin because I was so happy. They were just lucky it was too far for me to summersault back to the waters edge or I would have been back on that SeaBob for another lap around the bay.

I forgot to mention that they do offer a photo package that was very reasonable and then you get a ton of photos and movies sent to you digitally that is so much easier than trying to photograph yourself at the same time you’re trying to control the Bob. However it might be interesting to also attach your own go-pro strapped to your head for a first-person perspective, but I warn you that you go much faster than you can imagine under the water and not sure if it will stay attached? But definitely get the package because they capture all of the great moments with you in them, not just what you saw happening. 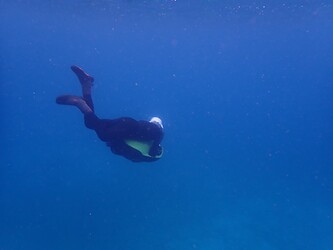 To me, this was the most perfect day of activities on an island I could fathom for myself. I got to fly above in the morning on the Trike; and then flew below with the Bob in the afternoon. There was so much adrenaline pumping that I was awake all night just glowing (don’t worry, it wasn’t a sunburn). Not only was the Sea Bob tour amazing itself, working with a company like SeaBob Aruba that understands that people with all types of physical abilities can do way more than we are ever given credit for; meant everything to me. The tour guides were phenomenal as tour guides and as human beings. Felt like we had also made new friends that day too**. So now I have 2 things that I always HAVE to do when I get to Aruba, but I think the Sea-Bob’s have secured my #1 spot.

**(And to help my tour guide who could not stop whistling a song he couldn’t remember the name or lyrics to; it was Scorpions doing “Wind of Change.” I hope that helps?)

This makes me smile and want to try something like this too.