Some airline personnel have contacted me since I started my petition encouraging United Airlines to become accessible, saying “it’s not possible to have wheelchair spaces on aircraft.
As this article (and many more) shows - airlines can but won’t - Welcome on board | CIEHF
Aircraft these days have cabins complete with showers, sleeping pods etc but airlines say they can’t have wheelchair accessibility! That makes no sense.
United Airlines have the perfect opportunity next month to choose accessible features for their upcoming replacement aircraft. Please encourage them to do so :Petition · Accessible Air Travel For All · Change.org

I agree with the airlines. As an engineer, I foresee too many problems allowing someone to drive their chair onto an aircraft. It’s not the same as a bus or van. There are other ways to deal with the issues. If you have to have this privilege, call the Airforce and tell you need a ride on a Globemaster to your destination.

It all comes down to money… of course the airlines have no problem making space for individual suites in the front of the plane for first class travelers because they can charge a bazillion dollars for each one on a trip and make money. If they have to sacrifice floor space in the middle to rear of the plane to make wheelchair securement areas they lose money because they have sacrifice a minimum of three seat spaces for each wheelchair spot they create and they will not be allowed to charge three times the fare rate for that class of seat to make it break even. Just like wheelchair seating in arenas and movie theaters, they need to sacrifice seat space for the wheelchair areas ( if they do it right).
As far as the argument that planes are different then vans or buses, they make wheelchair securement areas on high speed trains and they are pretty much similar to planes in terms of evacuation in the even of a crash. Which I believe is the argument the airlines are making (wheelchairs will get in the way and the users would be difficult to evacuate in an emergency.)

Rob I feel you maybe a little out of touch with current research on this topic.
To say it is a privilege for a disabled person to want to travel as comfortably as a fully abled person is somewhat of a stretch.
If airlines cared about disabled travelers they would make even small changes that would mean a lot e.g removable or movable armrests in all sections of the aircraft so that people could transfer from the aisle chair to the seat, without having to be lifted up and over the armrest. This could just be a few seats in each section.
Anyway, thank you for taking interest in this topic. Open discussion is what brings about change.

Research and design (and even testing of securement devices) shows wheelchair spaces and accessible toilets can be implemented without sacrificing space or seats.
As far losing money, 1/3 of the world’s population is classified as disabled so there is a huge market to tap into there. Through my involvement with this forum and other similar ones, I have come across many disabled colleagues who say they don’t travel, but would if aircraft were more accessible.
Thank you for taking an interest in this. I hope you have signed the petition - Petition · Accessible Air Travel For All · Change.org

When I was using a wheelchair and traveling by plane it was flight attendants preference. The wall in front of the first seat was actually designed to be used to carry wheelchairs. The staff were storing their stuff. I didn’t notice the sign until I was almost at my destination. Only 1 of 4 planes had this feature. It would have made my trip easier. One leg we had to transfer plans and I had to wait until the last to get my chair. They failed to notify the next plane that we were coming. It was hard to find a place and we were separated. If the wheelchair is almost the last on because you were using it, why is it so far buried in the compartment. Sometimes I feel that we are too much of a bother and they do these things to inconvenience us. Well I won’t fly again.

Yes it does sometimes feel as if we are a nuisance but on the other hand sometimes the flight crew and ground staff are helpful but are working with inadequate and dated equipment and facilities. That’s why I started the petition Petition · Accessible Air Travel For All · Change.org . Hopefully you will fly again and things will improve to make it enjoyable.

I’m writing about this for Fodor’s. Would you get in touch with me? I’d love to hear about your petition! saltairfreelance@gmail.com

I responded via your email.

It seems as if United Airlines does not care about the disabled community!
I wrote to the airline’s CEO and Board asking if their new replacement fleet would be accessible. I have not heard back. Therefore my petition will continue. If you have not read it,please do so, and if you agree with its content, please sign and pass on.
We have to stand united on this issue! 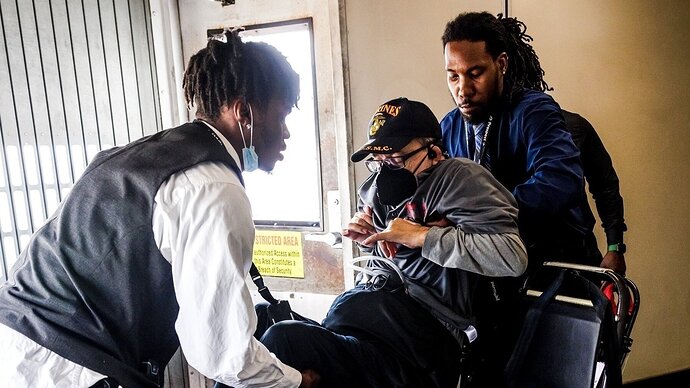 Obviously you don’t have a disability that constrains you to be totally dependent on a wheelchair or power chair to get around and be maneuverable. I would love and even pray for you to experience for one month what this is like. I’m am absolutely convinced you you would alter your attitude and not be so quick to be a smarta**.

Now, I am going to get esoteric. My attitude was altered years ago when I decided to give up suffering. I have no need for it. It is like an albatross that pulls you down into melancholy and disputation. I looked at the world around me and compared the examples of lives of those who have shitty health with a shitty attitude against the lives of those with shitty health and a great attitude. At that moment, I made a conscious choice to live the latter. I wanted to live a life without the shitty attitude that accelerates comorbidities and drives away the companionship of friends and family.

I am so happy and excited about life – even in the moments that present challenges like when I was recently denied boarding at the aircraft gate because the airline would not accept my chair with lithium ion batteries. This trip was immediately canceled with all hotels and event fees forfeited. This airline’s internal regulations selectively ignore some federal regulations (as they are allowed under the current ambiguities in the federal code) requiring them to accept such equipment. Despite the ground personnel’s assurances that I cannot change the airline’s regulations, I know that I can and will so they no longer discriminate against disabled passengers who have been remanded to the confines of power wheelchairs. I tried using the Jedi mind wave on them to get on but they were obviously immune to such parlor tricks. So, I am resorting to State law courts, congressional advocacy, proposing federal code changes and (if necessary) public shaming to effect this change. My smart pants will likely play a role here as well.

So, when I want to drive my wheelchair onto an aircraft, I will either call the Air Force or book space with an agreeable air freight carrier to get to my destinations and back. If you need help for the same, let me know. And if you want to continue this conversation on the engineering and economic considerations for why I don’t think chairs should be on aircraft, I will gladly continue. In the meantime, first/business class is a more comfortable and easier option to access now.

Point on first class or business class - more room of course but arm rests do not move so one can not transfer from aisle chair to seat but has to be lifted up and over and down into seat , and vice versa on arrival. I currently have a wound from being dropped onto an armrest.

Sorry about the wound. Some aircraft armrests move (newer) and others don’t. We all appreciate the ones that do. No one enjoys hauling gimps in and out of aircraft like sides of meat.

Are you being sarcastic, or over descriptive in your choice of words!?

I am being serious with an “over-descriptive choice of words.” That is how I feel during those lifts despite my efforts to use my sense of humor to retain my dignity. I can only imagine how these would be amplified should I find myself at the top of an evacuation slide. My only word then will be, “Weeeee!” because the landing may not be pretty. One flight attendant described it akin to dragging a wounded combat soldier out of a firefight.